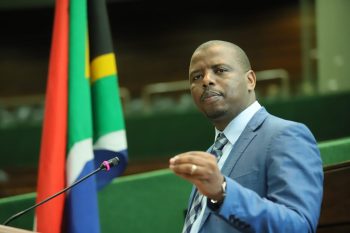 KZN MEC for Cooperative Governance and Traditional Affairs (Cogta) Sipho Hlomuka has expressed condolences to the Zikode and Zondo families in Bergville where two children aged 14 and 11 drowned on Sunday while they were swimming in the Woodstock Dam in Zwelisha.

The department’s disaster management teams responded to the incident soon after it was reported on Sunday. The search and rescue teams comprising of police divers conducted an extensive search of the dam and eventually found the bodies of the two children.

Hlomuka has urged parents to ensure that children are not left unattended near a large body of water. “We have seen tragedies such as this one before during the summer season when the weather is hot and children like to swim in open water. We are appealing to parents to ensure that children are taught about the dangers of large bodies of water, such as dams and streams,” said Hlomuka.

Hlomuka has deployed disaster management teams to provide support to the families affected by this tragic incident.

Hlomuka has also deployed disaster management teams to eThekwini to provide relief to the people who lost their belongings when a fire ripped through an informal settlement in Reservoir Hills in Durban on Sunday.

At 11pm on Sunday, the department’s disaster management teams received information about a fire in the area and responded swiftly. The hard work of the fire and rescue teams ensured that the fire was brought under control, with minimum injuries and without loss of life. Information at the department’s disposal indicates that only one person was injured in this incident.

Disaster management teams deployed by Hlomuka will be working with the victims of the fire who have lost everything. “We are working together with the eThekwini Metro and various Non-Governmental Organisations to ensure that adequate relief is provided to those affected by this incident,” said Hlomuka.

Hlomuka has appealed to residents to continue to be vigilant against the danger posed by fires in informal settlements. The department is embarking on its annual summer disaster awareness campaign aimed at informing residents about the dangers faced by the province during this season.