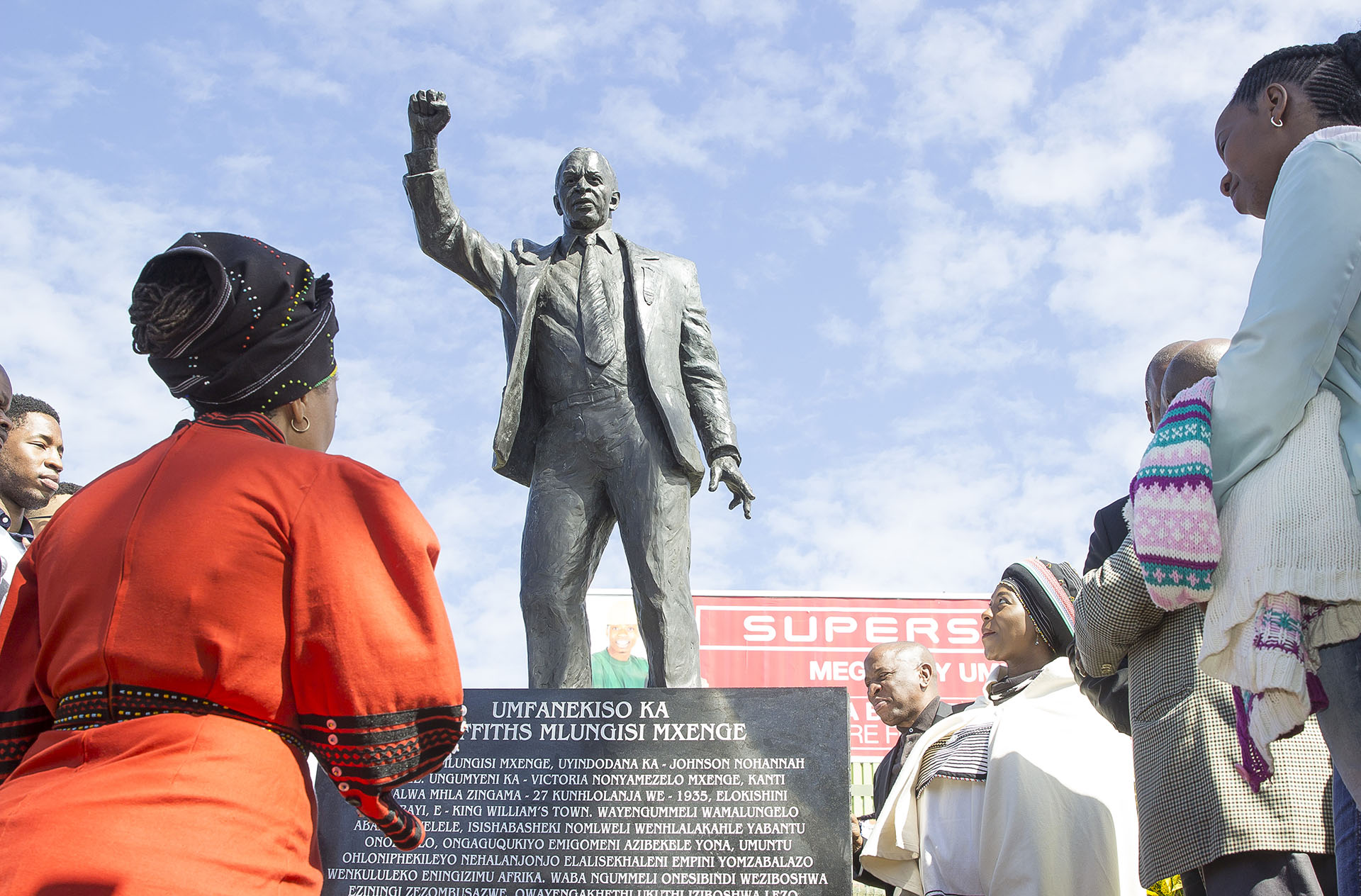 MEC DUBE-NCUBE at the unveiling of the Mr and Mrs Mxenge statues at Umlazi Mega City, pic.twitter.com/hlWLDeVtT1

Members of the Executive Council

Academics and members of the legal fraternity

Councillors and leaders of society

Members of the community

Members of the media

First and foremost, I wish to apologise on behalf of the Premier Willies Mchunu who could not be with us today.  He could not make it because there is a bereavement in the family.

As I start my address I want to reflect on the statement made by the President of the African National Congress Reginald Oliver Tambo on the 1st November 1981:-

“On the night of the 19th of November in the South African city of Durban, agents of the Pretoria regime brutally assassinated Griffiths Mxenge. Using knives, the murderers were not content just to take away the life of this outstanding patriot. In unbridled savagery, they extensively mutilated his face and cut off his ears.”

OR Tambo Further stated: “These acts of brutality can only serve to strengthen our determination to free ourselves. Through his martyrdom Griffiths Mxenge has set us the task to destroy the apartheid regime sooner rather than later.  As we lower our banners in memory of a great son of our people, an outstanding revolutionary, we renew our vows that we shall give no quarter in the noble struggle to rid our country of the murderers and tyrants that illegally rule our country and people. Farewell dear brother and comrade. Your sacrifice is not in vain.”

Programme Director, I want to express my deep-felt gratitude to everyone who is here today. We thank you for setting aside everything to lend weight and dignity to this important event.

We are humbled that the Mxenge Family has bestowed upon the provincial government and eThekwini Municipality the privilege to co-ordinate the memorial lecture held yesterday and today’s unveiling of the statues.

We convey messages of support from the President of the Republic of South Africa His Excellency J.G Zuma who has been the pillar of strength. Few weeks ago, President Zuma reiterated the point that we have a task to record all the stories of our people’s contribution to the struggle.

We need to remember those who laid down their lives for this freedom. Importantly, we need to be very closer to the families of our fallen heroes as they have many stories that lied buried their minds about the pain they suffered as they lost their loved ones, as they languished in jail under torture, as their property was destroyed and others murdered like Griffiths and Victoria Mxenge.

The unveiling of the statues of the two leaders is in line with the undertaking made by President Zuma when he started the previous term of office in 2009.

Flowing from the President’s Zuma’s call, in the State of the Province Address in 2012, we affirmed, as the Provincial Government, our commitment to elevate our heritage treasures to ensure that they get the recognition and honour they deserve.

Since 2012 we have been working with the Mxenge Family to ensure the erection of the two statues. We want these the two leaders to remain engraved in our minds for many more years to come.

We know that planning for these two events has not been easy. As family members you had to reach into the depth of your memories. Over the years you have had to think about the pain that your loved ones experienced in the hands of apartheid agents who murdered them.

There are many authors, political analysts and historians who have chronicled the life of the two leaders. Their accounts of their lives evokes both emotions and a deep sense of gratitude for it is through their dedication that we attained freedom in 1994.

Critically, all of us, collectively, we need to follow in the footsteps of the two leaders who ensured that today KwaZulu-Natal is recognized as the cradle of the glorious liberation movement that freed South Africa from racial oppression.

A large part of the rich heritage of this country has its roots in KwaZulu-Natal. Not only did this Province produce Dr John Langalibalele Dube, the first President of the ANC, it also gave our heroic struggle Pixley ka-Isaka Seme, Josiah Gumede and Inkosi Albert Luthuli amongst the many heroes who led the liberation struggle.

The ethos of selflessness in the service of our people should continue to inspire all of us as we strive to make the lives of our people better, and the sacrifices of our fallen heroes and heroines worth their while.

The unveiling of the statues and other celebrations is not only for the members of the ruling party but it is celebration of all efforts and contributions by our heroes and ordinary people in pursuit of the ideals of freedom, non-racialism, non-sexism and democracy.

In short we must all celebrate nation building by strengthening the values that bind us together as a nation, unique in the world by turning our backs on past divisions and embrace equality, human rights and a better South Africa for all our children.

Critically, speeding up service delivery and addressing the challenges of poverty unemployment and inequality will create lasting monuments in all communities to symbolise our victory and convince all who fought, suffered and lost loved ones that it was all not in vain.

As government we commit to reach out to different political organisations and work with them to embrace a common heritage of our struggle.

We need to identify those amongst their organisations who made valuable contributions and embrace heroes from across the spectrum not only political parties in opposition to the ANC as the ruling party. But to the broader civil society including worker’s struggle, academics, artists, musicians, church and various religious and traditional leaders and in Non-governmental organisations for celebration.

Programme Director, our message as government today is that we will continue to honour those who sacrificed their lives for this freedom. The statue of Griffiths and Victoria Mxenge have been constructed to preserve and restore our history.

These are heroes and heroines who have been largely neglected by past government who only erected statues of those who violated basic human rights of indigenous people. The apartheid government did not want to honour any of our heroes and heroines as the feared the inspirational value of such statues for the oppressed communities.

Importantly, we are calling upon all professionals in the legal profession to draw strength from the exemplary leadership of Griffiths and Victoria Mxenge. They dedicated their lives using justice to drive socio-political transformation.

Critically, in a democratic polity, the role of this noble profession is very significant. It is the watchdog of democracy and should always be vigilant in the matters concerning rule of law as guaranteed by the Constitution.

Lawyers are described as officers of Court. Their larger duty, however, is towards the society as a whole. Justice Fortas emphasized on this aspect in the following words:

“A Lawyer is not merely a craftsman, or even an artist. He has a special role in our society. He is a professional especially ordained to perform at the crisis time of the life of other people, and almost daily, to make moral judgments of great sensitivity. He is an important hand at the wheels of our economy and of course as the custodian of the flaming world of individual and professional liberty, as well as of the public order”.

The high status and respect that the lawyers generally command in our society burdens them with a corresponding duty that all of their actions or conduct would have the character of nobility imbued with the object of espousing the cause of general public good.

The lawyers constitute a noble profession. This naturally gives rise to an expectation that they shall discharge their duties in a manner that is professional, or in other words systematic, methodical, based on objective study and research of law.

We want to reiterate as government our commitment to working with the legal fraternity to advance human rights. We should not remain silent in the face of a growing trend of the abuse and violation of the human rights of the most vulnerable members of our society, namely women, children, the disabled, and the elderly.

As I conclude my address, I want to pause here and salute Mam Victoria Mxenge. She was fearless woman who dedicated her life towards the fight for this freedom and democracy.

Sadly Mama Mxenge was murdered on the 1st August 1985 which the South African democratic government declared as women’s month. She was sadly killed in front of her children by four men in the driveway of her home here in Umlazi. Working with eThekwini Municipality we will ensure that all processes are finalized to turn this house into a Museum.

It is important to note that after the death of her husband, Victoria Mxenge carried on with the law practice which they had formed.  She started a bursary fund in memory of her husband. She became a member of the Release Nelson Mandela Committee (RMC), the National Organisation of Women (NOW) and the Natal Treasurer of the UDF.

As a fitting tribute to Mama Mxenge we will double efforts to ensure that we address challenges faced by women. It is often stated that poverty has a woman face. I am calling upon all women to stand firm, unite and proclaim that as women we refuse to allow freedom to co-exist with poverty.

At all times the leadership of municipalities must remember that they owe their deployment to women. I am saying this because reports in various research organisations indicates that women constituted the majority of voters during local government elections.

As government we will ensure that our women deployees in municipalities undergo rigorous skills development programmes to prepare them to execute their responsibilities across all political party lines.

Comrades may the spirit of Victoria Mxenge inspire all women.

Let us work together to build our nation.

Let us work together to build unity, fight poverty and a better country for ourselves and generations to come.

Let us work together to protect women and children from any form of abuse.

If we do that Mama Victoria Mxenge will rest in peace.

With these words, once again I want to thank the Mxenge for giving us the opportunity to acknowledge the contribution of our struggle stalwarts.

We are indeed grateful as the provincial government that you have made these two events possible.